Moomintroll Daydreaming is the second most valuable and the second rarest Moomin mug from Arabia. Only 2005 pieces were produced for the Arabia’s Moomin exhibition in 2005. Besides the Fazer mug, Moomintroll Daydreaming is the only Moomin mug which production quantity has been publicly disclosed by Arabia. The mug was packaged in a white cardboard box decorated with the Arabia logo.

On the mug’s illustration Moomintroll is sitting by the water. The original art is from Tove Jansson’s novel ‘Moominsummer Madness’. As usual, the mug was designed by Tove Slotte. Slotte has said that the Moomintroll Daydreaming is one of her favorite Moomin mugs: “Moomintroll Daydreaming is one of my favorites due to the theme, but also for the graphic and peaceful appearance. It was the first mug with no added colors, so it has a very original Tove Jansson feel to it.”

What is the value of the Moomin mug Moomintroll Daydreaming? (updated 9/2022)

The value of the mug is determined by its condition. Scratches, dents, and smudges in the illustration are common factors that can reduce the mug’s value. It is a good idea to especially check the attachment points of the mug’s handle for cracks before making a purchase decision.

You can find up-to-date prices of all Moomin mugs on Mukify’s Moomin mug list.

Watch out for fake mugs! How can you tell if the mug is real?

The Finnish tabloid magazine Iltalehti wrote an article in 2019 about copies of the Moomintroll Daydreaming mug having been found in Sweden. The article also listed ways to identify a real mug from a fake. Copies may contain one or more of the following errors:

Few collectors have more than one piece of this mug in their collection, so checking the details of the illustration can be difficult. For reference, you can do a comparison with the pictures in this blog article or with even more detailed pictures on the Mukify product page.

The mug has a very recognizable bottom stamp. The main part consists of the well-known Arabia Crown stamp and a Painting Moomin stamp. In addition to these, the mug’s name ‘Moomintroll Daydreaming’ is written in Finnish, Swedish and English around the edge of the bottom. The year of publication, 2005, is also marked on the edge.

As usual, this Moomin mug originally had a label. The name of the mug is written on the label in Finnish and English. The mug is made in Finland, which is confirmed by the ‘Made in Finland’ text on the label. The price of a Moomintroll Daydreaming mug in excellent condition with the label attached can reach up to 3,000 euros.

In 2014, a Moomin plate was made with the same Moomintroll Daydreaming illustration. The plate belongs to the Collector’s plates series which includes ten 2-plates sets. This plate was sold in a set with the Fazer plate. The design is the familiar Teema series designed by Kaj Franck and the diameter of the plate is 19 cm.

Was this blog article useful? Read also our blog post about the TOP10 most valuable Moomin mugs. 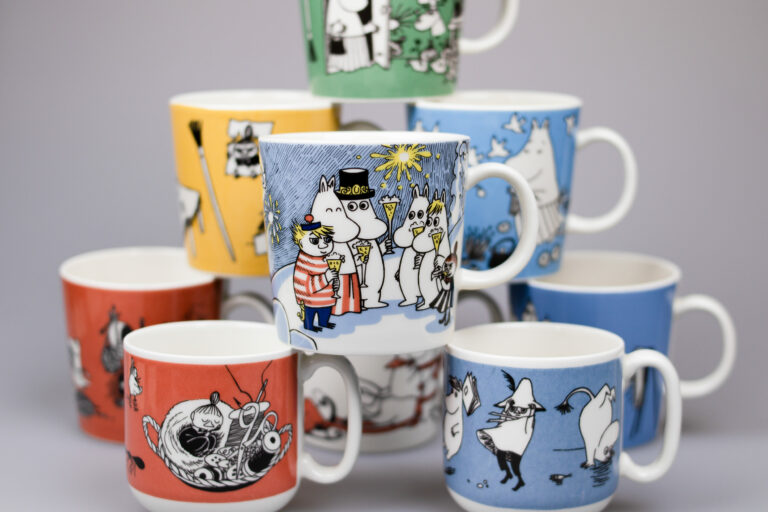 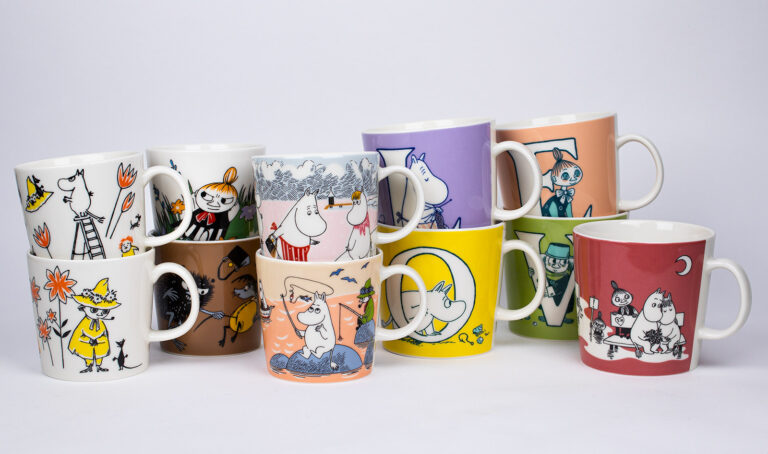